I am torn about trying to bond Star with our little foster, Snickers because for the past two years she has been bonded with “me”. I know that if she gets a boyfriend, that I will not be as important to her and I have to say that I am preparing myself for the “withdrawal”.

In all my years of having pet rabbits, I have never been as close to a rabbit as I am with Star. We have truly been joined at the hip, since we decided to adopt her after fostering her through three months of surgeries and recovery from her awful eye wound.

She became the “third wheel” in our previously two bun family. Ricky and Lucy had the run of the front of the house and in order for her not to be stuck alone in another part of the house, I started letting her sit on my lap for periods of time during the day.

It was from this that she because extremely socialized and she will actually tell me when she needs to use her litter box while sitting on my lap. She started going places with me, like on short errands and trips to the HRS and I learned that she likes being on the go.

All of this is very unusual for a rabbit and I have enjoyed that she wants to be so close to me all the time. Several nights a week, I even let her snuggle with me in bed until she tells me that she is ready to go back to her condo. Needless to say, I am just CRAZY about that rabbit.

We plan on starting them off with some dates next week and see if they look like they have a future together. Star is the scrappiest most headstrong rabbit I have ever met and she has no fear, especially of other rabbits. Snickers will have to learn to be very submissive to her if this is going to work. Star is VERY demanding when it comes to attention and he will have to be to handle that.

I will be posting updates and pictures of the progress as things go along. It took six weeks of four to five sessions a day, every day to bond Ricky and Lucy. After a month, we were wondering if it was ever going to work. We eventually found the formula and so I know that if we are consistent and in it for the long haul, that success is a lot more probable.

For those of you who have not bonded two rabbits before, it is a process by which you introduce and then socialize two bunnies into living together. Rabbits are extremely territorial and it is rare that bunnies who are not from the same litter will easily allow other rabbits to share their territory. Occasionally, this will happen organically and take no effort at all, but most of the time it requires a concerted effort to make it happen.

You start out by having the two rabbits go on a “date”. This is an introduction and should occur in neutral territory that neither rabbit considers “theirs”. The smaller the space the better and you should have a water bottle set on spray very handy.

Watch the two rabbits very closely for their body language. If any aggressive signals or stances are taken, a quick squirt with the water will usually slow the aggression. Look for ears back or tail up postures. If one of the rabbits sticks his head underneath the other’s body, that is an aggressive behavior. It is a DEMAND for grooming and if the other rabbit is not prepared to be submissive, this could result in some biting or fighting.

Ignoring each other is not a good sign, either. You want the two rabbits to acknowledge each other and grooming is the optimal outcome. Any kind of mounting is extremely aggressive behavior, but not necessarily bad. If the rabbit being mounted accepts being submissive and does not fight back, then it is good. If the rabbit being mounted resents being dominated, then mounting can result in some serious fighting. Discourage all mounting if the bunny does not like it and do not allow it in future meetings to avoid them fighting.

Mirroring or copying the other rabbit’s movements is a good thing. It is a good sign if both rabbits are sitting there taking a bath. If both rabbits are not paying attention to one another, be prepared for any sudden aggressive behavior because it can often occur very quickly.

If there is any kind of tiff or fighting, never allow the bonding session or “date” to be over immediately. This will teach the rabbits that if they fight, the bonding will be over. Instead, force them to lay side by side calmly without letting them fight or nip each other. I make them lay cheek to cheek and pet them both. I praise them and make them stay like that for at least five minutes before ending the bonding session. This is important.

This is a lot more to share with you on this subject but I will save that for a future update when report how things have been progressing. 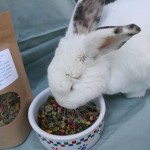 A pinch of an herbal treat is much better than a piece of fruit or a raisin. Note: Disregard the full bowl, the proper amount is a nice pinch. Star was stealing a nibble while I was taking the picture for my store. 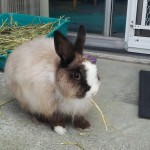 I had a person come up to me the other day and ask me what their friends should do with a rabbit that is living inside a cage in their garage. My answer was easy, “Take him to the local shelter and relinquish him so that he can get a nice new home with someone who cares about him”.

Their response was, “Isn’t there a petting zoo around somewhere”?

I work at a couple of local shelters and it is true that they sometimes euthanize rabbits there. Thankfully, the days of putting bunnies to sleep because there is no room for them in the shelter are not as common as they used to be. Still, rabbits occasionally do get put down for illness or behavior issues because shelters do not have the resources to spend on their medical care and there are still some antiquated rules about animals that bite, but this happens for less than one percent of the buns that are admitted to the shelter.

What do you think the odds of dying are for a rabbit that is released into the wild? My guess would be that it is less than 50-50 that the animal survives a year. Isn’t that a more sure of a death sentence than the one in a hundred chance of a bad outcome at the shelter?

I know that shelters have gotten a bad rap with the public because they admittedly do euthanize some of the animals that come to them, but the public is more to blame for that than the shelters are, in my opinion. Why do people continue to purchase pets from the malls and local pet stores instead of giving homes to animals in the shelters and those living with rescue groups? I personally think that most people do not give consideration to the fact that when they do this, they are now part of the problem.

When a pet is purchased instead of being adopted, that is one more critter who will languish in a cage at the shelter instead of going to a new home. That is also, one more animal that will now be bred by a breeder to replace the animal in the pet store that the person just bought. It continues the cycle of breeding more unnecessary pets.

The shelters are not places to be feared. They are bastions of hope for thousands of animals who are in need of some caring people to give them the forever home that they crave. The public should not shun their local shelters. They should be supporting them by adopting from them, but also taking animals there to find new homes when necessary.

Better to end up in the shelter where there is at least a chance of a new life with some new people who will give better care and more love to an animal, than to allow the little guy to be neglected and abandoned. When this goes on long enough, his condition becomes so bad that when he finally does end up at the shelter, that there is not other recourse than to end his life.

Many people simply set the animal free, so that someone else will find him and end up with the responsibility of taking him to the shelter. That is pretty sad. How can people be so heartless?

I think folks justify it in their minds by demonizing the shelter and rationalizing that setting their pet free or locking him away in a cage someplace out of sight, that it is actually better than being in the shelter. Nothing could be farther from the truth.

The ultimate betrayal is preventing your pet from being able to finally get a new home where the people will have more time and love to give to him. You can rationalize running out on the commitment that was made when bringing the animal home in the first place, but then why not just let the pet move on and go somewhere where he is truly wanted?

Shelters are not the enemy and while no animal wants to end up there, for most it is a chance at a new life and a new beginning. Embrace your local shelter and even donate and volunteer there. See what is actually going on by becoming involved. I do not think there is a shelter in this country that does not need fresh new volunteers to help them in their quest to find new homes for their charges.