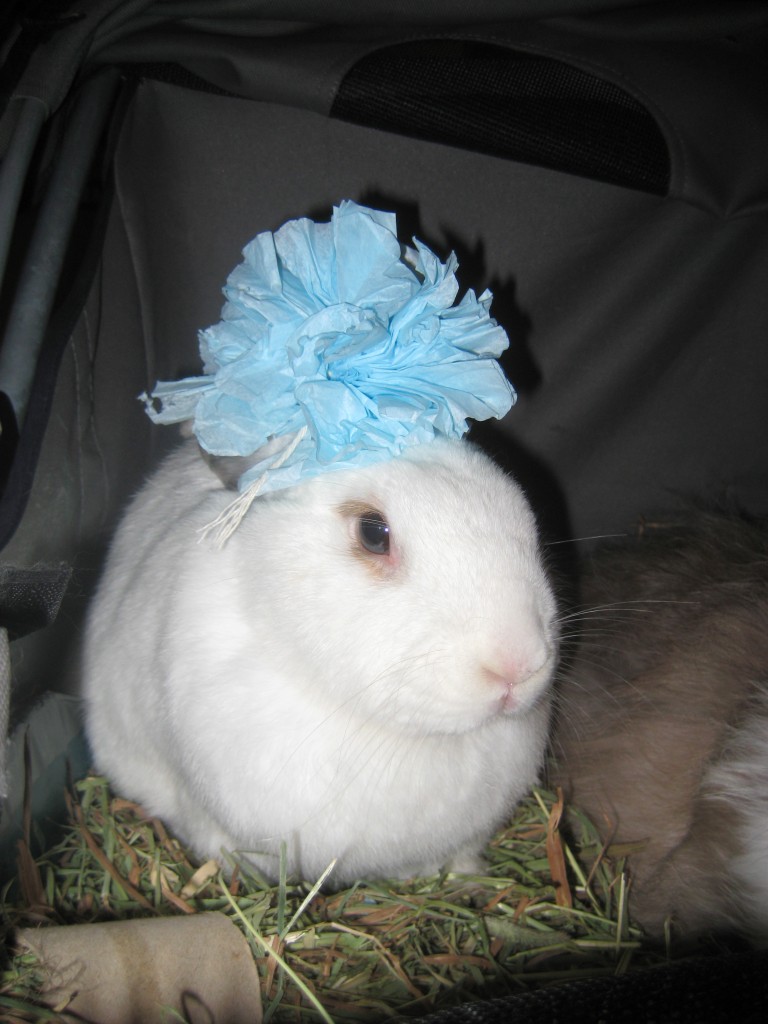 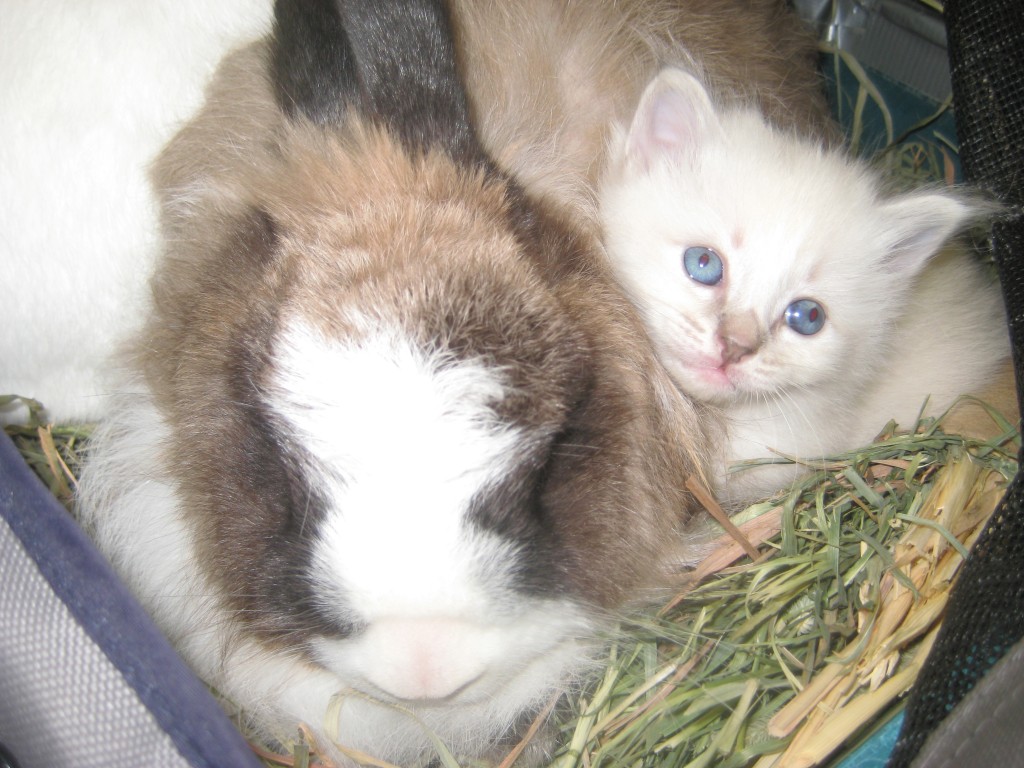 Snickers meets a 3 1/2 week old kitten. I snapped the photo just as the kitty woke up from sleeping with his chin on Snicker’s back. 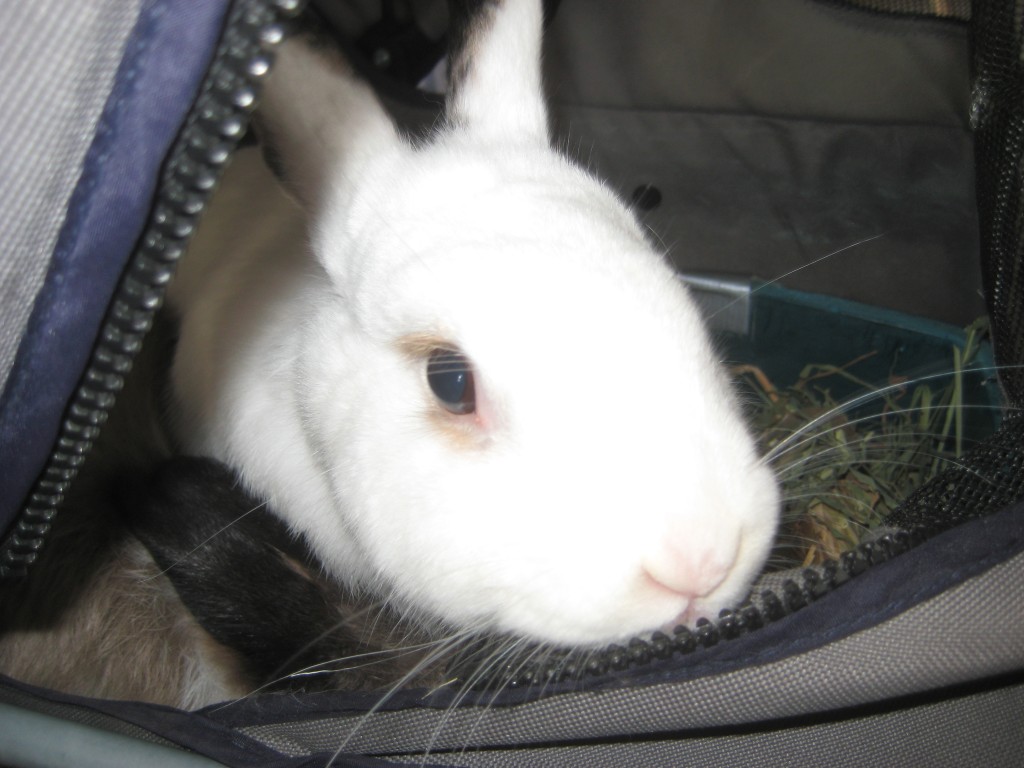 Star peeking out of her stroller during the Walk For Animals. 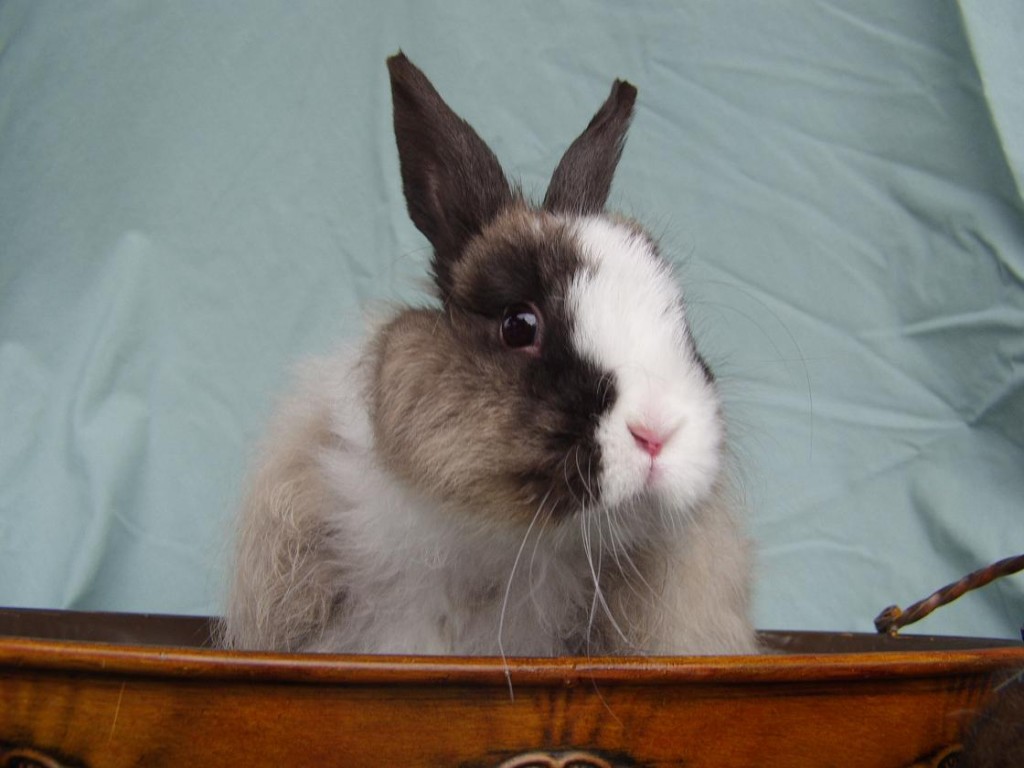 Snickers posing at the beach in Feb. 2012

It has taken me a few days to gather my thoughts so that I could write this blog. I became aware of a big rabbit rescue case back east by reading some posts on my Facebook timeline.

There was a person who is very well known in the rabbit breeder and show world who was reported to the local Humane Society. This was purportedly done by member of the House Rabbit Society.

When the local authorities went to his property, they confiscated 375 rabbits. Rabbits were this man’s world. When you have that many rabbits, you must eat, breathe and sleep with bunnies.

Some say that the conditions that the buns were living in was not humane and so the man was charged with a crime. In my study on this case, I read the comments from many people who had seen the videos of the conditions from the news reports. They said that the operation was a typical rabbitry and no worse than any other.

I personally have not viewed the video, but I am convinced that this is probably true. I have worked in rabbit shelters for years and know that taking care of just 30-40 rabbits is a full time job. You can spend hours cleans and trying to care for them and as soon as you are done, it is dirty again. It is a never ending job.

Having witnessed a couple rabbit breeding operations, they are not usually kept as clean or nice as we do at a shelter. Rabbits are housed in wire bottom cages to simplify the job for the owner (farmer). The waste just falls through the bottom of the cages into some kind of collection system.

Since the rabbits are not spayed or neutered, there is a lot of spraying by the males going on. They squirt their pee all over the place, like most un-neutered males do, and so there are usually splash guards in place to minimize the effect. Still, it is a huge job to keep the urine spray under control. The caustic bunny pee really eats up and stains anything it touches.

This all creates a relatively dirty environment when you have over a hundred bunnies living in one area. Even if you were cleaning it up all the time it would never be spotless, because by the time you got it half done, the bunnies would have peed and pooped it up again. haha

I am not trying to justify any of the conditions these bunnies were living in. I am simply stating that in all probability, this operation was no better or worse than most other legal rabbit breeding businesses.

It was very enlightening to read and digest the messages by the supporters of this very popular person who was incarcerated in the story. Their take on the whole matter was that a bunch of “rabbit activists” had started all of this.

As the drama played out on Facebook, I realized that there were many more of the rabbit breeders and hobbyists who showed and bred rabbits, than House Rabbit advocates. They viewed our ideas as fringe and wacky, because rabbits are livestock.

I read comments like, “We don’t understand why all those west coast shelters are overloaded with bunnies. When we have too many rabbits we just put them in the freezer.”

Others said, “Sure, people have pet cows and pet pigs, but if you let them live in your house with you, then you deserve the destruction that you get from it. It’s their business if they want to let rabbits chew up and destroy everything in their houses.”

Most of the people who consider bunnies as pets, do not think that they should be treated as livestock. To people who associate them with agriculture and eat them, that position is extreme.

Should people be allowed to farm or breed rabbits at all? I don’t think that anyone who eats beef, pork or any other farmed meat can honestly say no. This is why many rabbit lovers are vegetarian or vegan.

My opinion is that we already have it both ways, so we need laws recognizing the duality. There are millions of rabbits who live in farm conditions and thousands more who live as beloved pets. In California, they are solely livestock in the eyes of the law. This validates the position of the masses that rabbits are meant to live outdoors in miserable conditions destined for a horrible death at the whim of his owners.

Yet millions of people are slowly learning the joys of having a companion rabbit. As their popularity grows as pets, so does the glaring conflict for rabbits: pets vs livestock.

You cannot have a rabbit and call him a pet, then treat him as if he were livestock. The biggest problem I run into trying to educate people is teaching them this difference. A rabbit who lives in a cage in the back yard just eating pellets is not a pet. Pets live with you and you share the enjoyment of the human/animal bond. Otherwise, what is the point?

Will the “activism” or advocating for rabbits stop people from farming animals? I truly doubt it. I believe that vegetarians will always be a minority and that there will always be farms. Still I see a march towards more humane treatment for all animals, because public awareness has demanded it.

We have recently seen Europe ban all animal testing and California enact laws to require some livestock be kept in more acceptable conditions. I think the idea is that suffering is not meant to be part of the equation, regardless of whether you plan on eating the critter or not.

The USA recently shamed itself in the eyes of the world by allowing Congress to pass a law to make it a federal crime to secretly video the conditions at factory farms and processing centers. This means that regardless of the laws, there will be no whistle blowers or anyone to enforce them. This is our powerful agricultural lobby flexing it’s muscle against this new demand by the public for less suffering of the animals caught up in the food chain.

For a rabbit, his lot in life is solely dependent on whether he was born by a breeder at a farm or a breeder who sells to pet stores. One will live about six months and be killed and the other has a chance to live a happy long life of 10+ years with a family. I have always said that if you are a rabbit and live in my house that you have hit the lottery. haha

My bunnies are so spoiled. I love spoiling them. I volunteer at shelters and donate to rescues because I believe that there is a place for rabbits as pets in our lives. They are more than just livestock. If this makes me an activist, then I guess I am.